How to Transfer Files into your Android Phone

-- Tuesday, March 18, 2014
More and more files are stored in your Android phone as now smart phones have larger and larger internal storage. It becomes a little complex if you want to save some files from the computer to your Android or transfer from your Android to your computer. Take Apple for example, if you want to transfer data between your phone and computer, you need to have an iTunes on your computer and connect your USB cable to the computer. By doing this, you can install some media file or some apps. Today, I will show you several methods to save files on your Android phone. 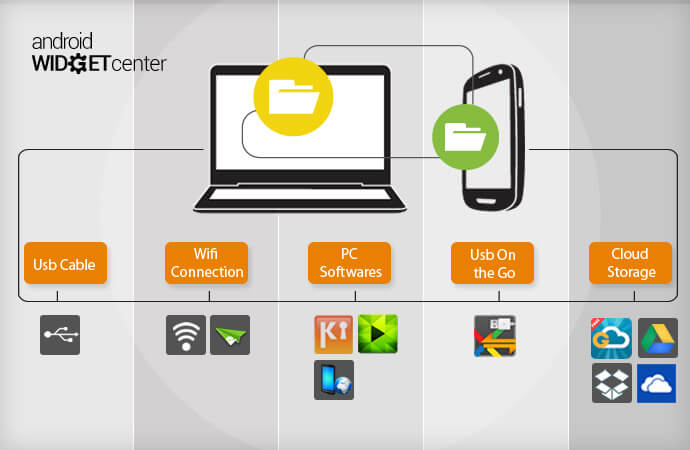 2. To Transfer Files on Android Through Wi-Fi
Another common transferring method is to transfer with Wi-Fi. Usually, once the phone and your PC are connecting to the same Wi-Fi, you can send files between them. Android itself doesn't support to sync the files between phone and PC with Wi-Fi. So, what you need is to use a third-party tool to help you. Wi-Fi transfers faster than Bluetooth does. If you want to transfer more than one file, Wi-Fi would be a better choice.

3. To Save Files on Android Through Cloud Transfer
It's now popular because it fits well to almost every operating system including iOS, Android, and so on. The amount of service provider which provides cloud transfer is large enough and it is convenient for phone users. In some phones, there is cloud transferring function that built-in in your phone.
Pros: It is compatible to almost every operating system like Android, iOS, Symbian, and so forth.
Besides, the transferring speed to transfer files between your computer and your phones is quick. No matter you want to transfer between phones, between phone and computer or between phones and tablet computer, you can transfer files as you want.
Cons: If, there's no Wi-Fi to use, it will waste you a lot of traffic. Also, the storage room of the cloud transferring is also limited.

4. Save Files via NFC
NFC works perfectly on Android phones, especially that on Android 4.0. Ever since Android Beam has come out to us, it strengthens the function of NFC. Nowadays, NFC can only transfer files from phones to phones. If you want to transfer files between phones, what you need is to place the two phones together.

Above are all 5 ways to transfer your files between phones. I really hope that this may help you. If you failed when transferring your files and have your files lost, you can also come to us and download Android Data Recovery on your computer and have it restored back to you.