-- Wednesday, August 21, 2013
With the rapid development of mobile devices, contact and communication in between people via portable handsets becomes common and convenient. Different from the past, people nowadays prefer to enter and store the address, phone number, email and other information about a specific contact in their Samsung Galaxy instead of handwriting hundreds or thousands or them on the phone book. However, when we want to change Samsung Galaxy S5 to S6, how can we quickly transfer contacts to the new cellphone? In the following part, we will show you how to directly transfer data from one Samsung to another via Kies.

Note: Data transmission in between Samsung phones only works under the circumstances of USB connection. Wi-Fi connection doesn't support this function temporarily.

We will take contacts as example and display how to transfer contacts among Samsung phones step by step. The operation and process of moving other media files like music, photos, videos from one Galaxy device to another are the same as that of contacts.

Step 1 Connect Two Samsung Phones via USB Cable
Launch Samsung Kies program, and connect two Galaxy devices to the computer via USB cable. Once they are successfully connected, information about the two handsets will appear on the left column of the main interface. 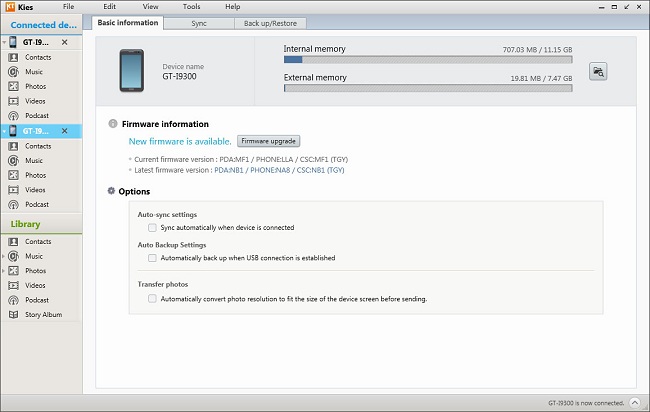 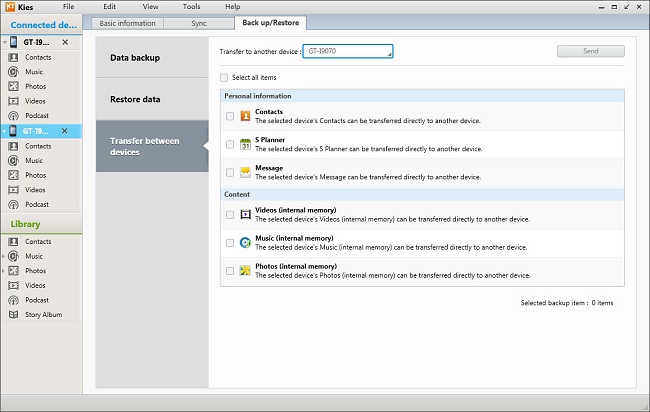 After a while, the transmission will end. Press "Complete" to finish the process. Then, you can check the contacts in your new Samsung Galaxy. 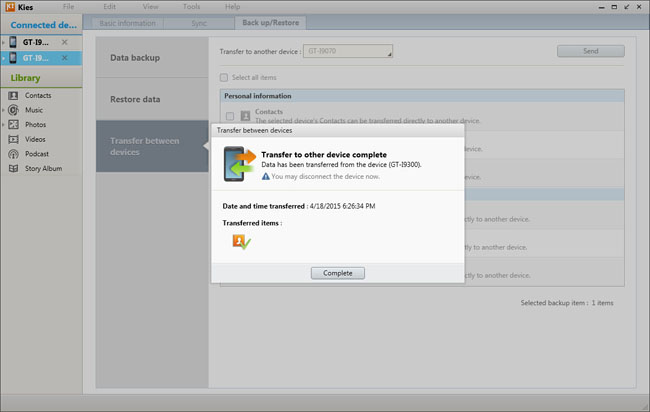 Note: To transfer other content, just select those items you need and press "send".

Transfer contacts from old Galaxy phone to a new one is very convenient and simple. However, this method doesn't always work well, supposing you want to transfer Samsung i9300 to Galaxy S5. If you've read the tutorial Samsung Kies: Manage Samsung Devices via Computer, you may figure out why it's not workable. Kies have two versions, Kies 2.6 and Kies 3, supporting different Android system versions. i9300 is in Android 4.1.2, while S5 Android 4.4. Two devices can't connect to the same version of Kies. This feature of Kies is quite weird.

To tackle this issue, users can turn to another program, Phone Transfer. Phone Transfer has so great compatibility that can support iOS, Android, Symbian and Blackberry systems. Data transmission between two handsets with Android 4.4 or lower system can be accomplished with the help of Phone Transfer. Follow the two steps below and transfer contacts from handset to handset with Phone Transfer. 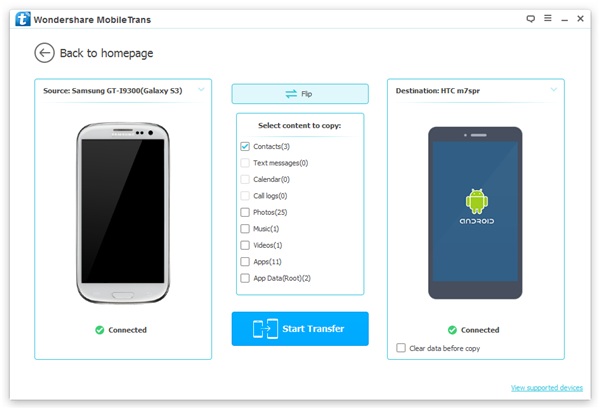 Step 2 Transfer Contacts between Phones
Select "Contacts" and click "Start Copy" to move all the contact data from one device to another. 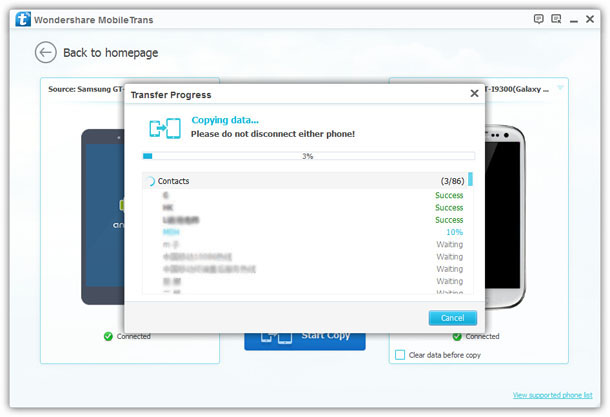 As you can see, transferring data with Phone Transfer is also very easy and convenient. If this article is helpful, repost and share it to your friends.