How to Transfer Popular Apps Data from Android to Android

-- Thursday, January 21, 2016
Facebook Messenger, Snapchat, Instagram, Pandora, Netflix, and more apps are the top and most popular apps on Google Play for Android users. We all know that app data will be generated while we are using the app especially those chat apps like Facebook Messenger, WhatsApp and more which has some pictures, videos and audios stored in the chat history. Sometimes these app data are critical and we want to transfer app data from old Android to new one. What we need is a once-and-for-all app data transfer program called Phone Transfer.

Phone Transfer specializes in transferring popular apps data from Android to Android. No matter you use Samsung, HTC, Sony, LG, Google Nexus and more Android phones, it is supported as long as it runs OS from Android 2.3 to Android 6.0. App data on your Android, including the pictures, videos, audio and other files can be easily transferred between Android phones.

How to Transfer Apps Data from Android to Android

Step 2 Connect Both Android Phone to PC
After launching Phone Transfer on your computer, you will be asked to connect both your Android phones to the computer. Then, when the program detects your Android phones, both the models will be listed in the interface. Make sure that the source devices are listed on the left and the destination one on the right. Tap "Flip" if they are not on the right place. 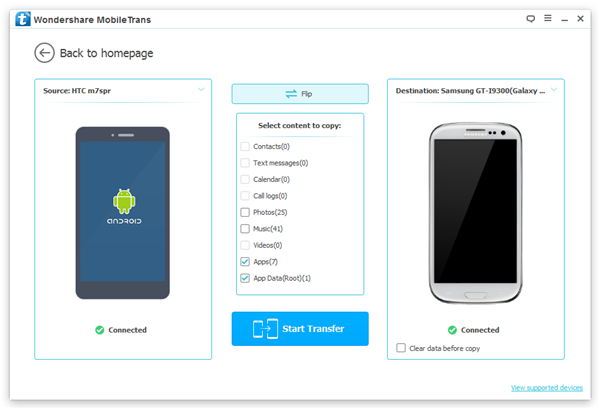 Note: Android Root is needed during the transfer process. When the below interface shows up and asking you to root your device, just click on "Confirm" to let Phone Transfer root your device temporarily. 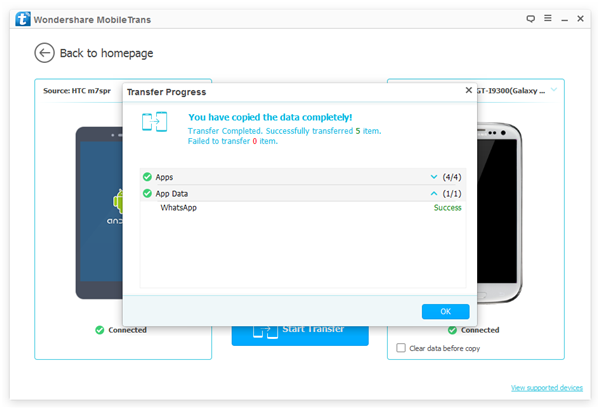 App data are now transferred from your old Android to new one with the help of Phone Transfer. As you can see, WhatsApp messages, Facebook Messengers, Instagram, Skype and more Android app data are copied to new Android smartphones with three simple steps. Phone Transfer is much more powerful than that, you can try it on your own to see what else Phone Transfer can copy.