-- Friday, July 10, 2015
Music has a great influence on people. No matter being happy or sad, people like to listen to music so as to get relaxed. For music fans, they prefer using Android smartphones as the music player and enjoy whatever tunes anywhere anytime. The first thing we should do is to download and install a useful music player app on your Galaxy S6, etc. There are a great many music-related apps for Android devices, yet some of them do stand out. It's impossible to look at all of them, so we just picked up 5 Android Music Player Apps that we think is some of the best there is. Let's take a glance.

NO.1 Google Play Music
Google's Play Music is mostly known as a front-end for listening to music you purchased from the Google Play Store and stream from Google All Access. Besides, Play Music app is also a fantastic offline music player. With the app, you can download music from the internet and share up to 20,000 hit songs you like to the website. If you got some tunes stored in Google's cloud locker, some pinned in the library from All Access, and some saved in SD card, you can mix them together regardless of where it's stored with this app. This is also what makes Play Music stand out for many Android users. 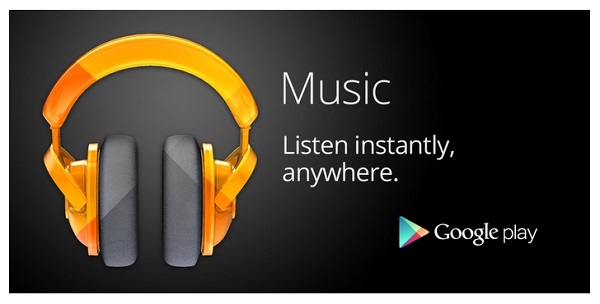 NO.2 Poweramp
If you got some music in FLAC format and looking for ways to play the songs in your Android mobile phone, Poweramp is your first choice, which handles FLAC files like a champ, as well as other slightly less common files like OGG, WMA, ALAC and so on. In addition to just playing all of your odd music formats, built-in 10-band equalizer, you can enhance the tunes for better sound with the app. These features may be a bit overwhelming for extremely casual music listeners, but for the power user, they're extremely useful to have. Poweramp is free to try for 15 days, after which you need to pay for the full version. 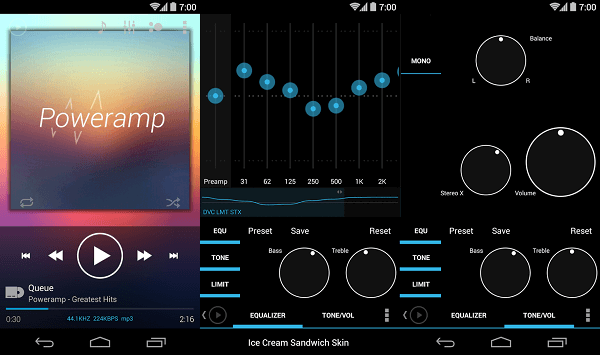 NO.3 doubleTwist
doubleTwist has the function like other player apps did. What makes it particular and popular is that it can help you sync your iTunes library to Android device. doubleTwist premium also throws in a customizable equalizer, auto-fetching album art, and automatic podcast downloading. Magic Radio, is a new feature of doubleTwist, which creates custom radio stations based on the usual artist/song selections. You can experience this cool feature with a 7-day trial, but after that, it runs a relatively steep $24.99 per year.

NO.4 N7 Player
n7 Player is an extremely popular option that's shaped up to be just as great as the other players we've mentioned. When you first fire up n7, it automatically builds your library for you. It compiles everything on your both your SD card and internal storage, and will even fetch albums for you. Afterwards, it throws you into the main screen of the app and gives you a few pop-up tips to help you navigate around, and these navigation features are really where n7 shines. Plus, there's also DLNA and Chromecast support baked right into n7 Player, which allows you to stream the tunes to any wireless device in your house, including smart TVs, computers, game consoles, and Google's own Chromecast.

NO.5 JetAudio Music Player
jetAudio, a well-presented, feature-rich and slick audio player, takes sound seriously. To skip to the next track, you just need to simply flicking your finger. Then 10-band graphic equalizer is a nice beast too, providing a staggering 36 different pre-sets. There are two versions of the app: one is a free ad-supported, the other is a Plus version without ads. 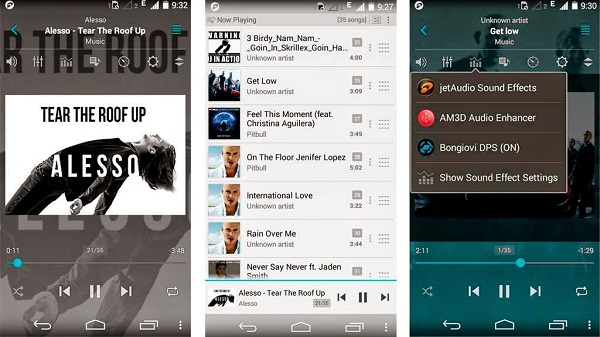 Five music player apps mentioned above are useful and equipped with excellent features. Just choose the one meets your need and enjoy the music with it. If you know other better music player apps, please share with use and leave it below in the box.