-- Monday, June 26, 2017
iOS 11 was unveiled by Apple at its WWDC 2017 keynote on 5 June. After this big event, people who are interested in the terrific and fancy features from iOS 11 may try to install the iOS 11 Beta. After all, it is not big a deal to install the beta as users without a developer account can also be able to download and install iOS 11. In this way, you can run early beta builds and explore new features.

However, the iOS 11 Beta is not such a stable system to use. If you get iOS 11 beta installed right now, your iPhone or iPad is likely to crash frequently, run hot and so on. This is because the beta version is designed for developers only for a reason and it is incompatible with many apps. If you now would like to revert it to the original one- iOS 10, please just go on and it is easy to deal with. 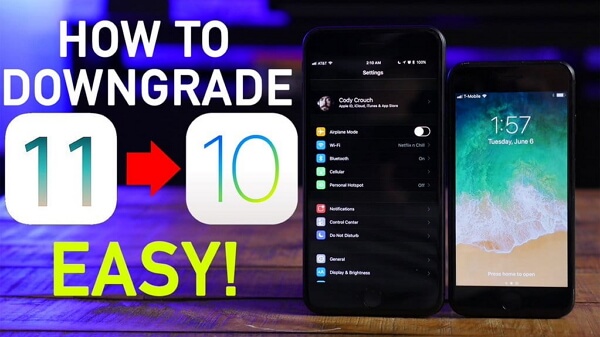 Note: Before you start to downgrade iOS 11 Beta to iOS 10, please do make a backup copy to prevent losing data accidentally. Basically, you can backup your iPhone via iTunes with computer by you own, or you can also try iPhone Transfer, a very effective app that allows users to backup iPhone files in several simple clicks.

Step 1 Select an iOS version that is the most recent stable release (click here to download the correct iOS IPSW file for your iPhone or iPad).

Step 2 Run iTunes app on your computer(Mac or Windows PC) and then connect your iPhone or iPad to it via the USB cable.

Step 3 Choose your device in iTunes and now you can start the downgrade process by following the below tips under the summary section in iTunes interface:

For Mac users, please press Option key on your keyboard and click on the "Update" button at the meanwhile.

For Windows users, please press Shift key on your keyboard and click on the "Update" button at the file you downloaded before and update / restore your iOS device to the selected version.

The downgrading process would take a while. Please wait patiently! However, if it fails to downgrade to the iOS 10 version, you are able to choose restore it.

If you met any question when you downgrade iOS 11 beta to iOS 10, please simply drop us a comment below and we would try our best to figure out the problem and provide the best solution for you.