Guide to Replace Kinguser via SuperSU on Android

-- Friday, October 21, 2016
Actually, once you root your Android phone, the apps that need root privileges would ask for the permissions. And you need to grant or deny it for your choice. It is very annoying as every app would ask for permission every time. For the advanced Android users, it is not enough just to get their device rooted. It is necessary for you to have an App to manage the root access. This kind of App could be Kinguser and SuperSU.

With SuperSU or Kinguser, it can optimize function to increase the phone speed and uninstall unwanted system apps that takes more space in the internal memory. What’s more, it allows for advanced management of Superuser access rights for all the apps on your device. It can keep track of the Apps that you have granted the permissions before. In this way, those Apps would not keep asking anymore.

SuperSU is very popular among Android users because of its great reputation and its feature that can be compatible with almost all the Apps in Android. Kinguser, however, can not be so trusted by some of the Android users. They would want to get rid of it and turn to SuperSU instead. Now I want to talk about how to replace Kinguser to SuperSU on Android device.

Guide to Replace Kinguser via SuperSU on Android

Now, I want to recommend you a very easy way to replace the Kinguser with SuperSU on your Android device. You can just try it at first.

2. Uninstall KingRoot on your Android device.

Though this method is very simple and just like the way we replace the App with the one which has the same function, it does't always work because when you try to install the SuperSU, it would ask you to update su binary, which fails to work a lot. At this time, you need the custom Recovery for flash Supersu zip. However, it would not available either as the development level in Android device is low.In this situation, you can still try the other method below.

1. Download and Install Terminal Emulator for Android as well as the Compressed Archive Files Replace_Kinguser_with_SuperSU-v2.4.zip and unzip the file.

2. Extract the Replace_Kinguser_with_SuperSU file and send the extracted folder MRW to outermost directory in the internal storage on your device.

3. Open Terminal emulator and type the command "SU" on the Terminal Emulator for Android. Then please grant the permission in the message box so that you can move on the process.

4. After that, you need to enter the command "sh /sdcard/mrw/root.sh".

5. It might display some error, but just ignore it and the SuperSu App will launch automatically. If it doesn't, you can open it manually.

6. Update SU binary normal, and then reboot your device. The job is done! 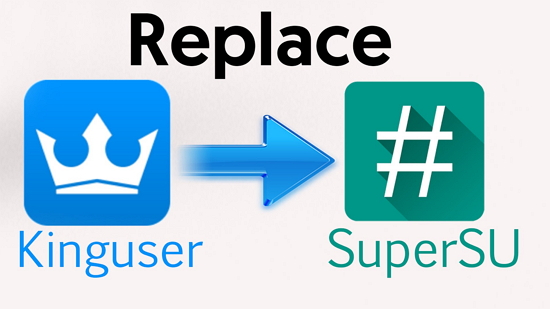 If you have any questions about it, please kindly drop us a comment!