How Much Do You Know About SIM Card

-- Tuesday, September 27, 2016
Do you know what SIM card is? You must hear it a lot in your daily life because only with SIM card in, can your smartphone run normally.The SIM cards are provided by the carriers and you can enjoy the service that comes with it. Of cause, you need to pay for it every month. If you want to know more about SIM card, please continue to read.

SIM Card, acronym of Subscriber Identity Module, is also known as a user identification card or smart card. We use our mobile phone to make a phone call, send text messages and get the Internet with SIM card in. The chip stores the information of digital mobile phone customers, the encrypted content key and the user's phone book and so on, which is available to identify the corresponding user and encrypt the information of telephone conversation.

The SIM card is offered by carriers like AT&T, Verizon, Sprint and T-Mobile. Different carrier provides the service with different fee standards and service composition. You can use the same SIM card with your phone number and data plan in different device. But for the mobile phones provided by the carriers, you need to remove SIM card lock first if you want to use the SIM card from the other carriers.

Nowadays, SIM cards have been made smaller and smaller. The first generation, called full-size SIM, came out years ago. And then it was followed by Mini-SIM, Micro-SIM and Nano-SIM.

Mini-SIM, known as Standard SIM or Regular SIM for different carriers, has the size of 25.0 mm × 15.0 mm, which is much smaller than the 1FF.

Micro-SIM is 52% smaller than the Mini-SIM, which measures 15.0mm × 12.0 mm. iPhone 4 was the first mobile phone to use Micro-SIM. It is because the iPhone 4 needs more internal space to increase the battery capacity and a smaller SIM card is necessary. Then the other smartphone suppliers follow the ideas. So there are various smartphone use the Micro-SIM including iPhone 4/4S, iPad, iPad 2(3G), Samsung Galaxy S3/S4, Nokia N9, the Nexus 5 and the Sony Xperia and so on.

Nano-SIM, at 12.3mm x 8.8mm, was introduced by Giesecke & Devrientin the CTIA WIRELESS 2012. After that, it was sold to different countries by the mobile service providers. And it is Apple again to introduce the Nano-SIM into the smartphone (iPhone 5). Later the Nexus 6 and Samsung Galaxy Alpha followed.

Part 3. Advantages and Disadvantages to Have a SIM Card

Advantages to have a SIM card:
1. With the SIM card, you can have the service like making phone calls, enjoying network, sending messages and so on.
2. Available to carry data when you change a device. The SIM card holds the data including your phone number, text messages, service features, Address book, PIN lock and the Location Area Identity, which make you easier to use the device from one to another.

The SIM card takes an important role in our life but there are also some limits when using it:
1. Sometimes the carriers would lock the SIM card for the device and you can not get rid of the high service fee. If you want to unlock it, you need to pay for it as well.
2. Your contacts in your SIM card would be stolen when someone place your SIM card in their phones if you forget to lock your phone.
3. The SIM card can go bad and could work. So you need to get a new one. 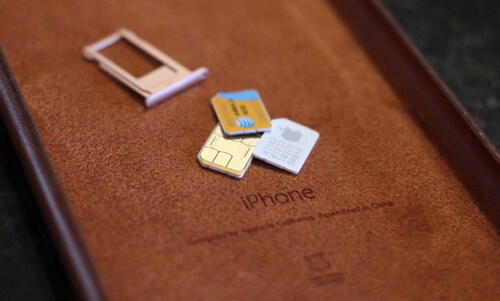