Find Music from the Memory Card on Android Phone

-- Wednesday, January 29, 2014
Some Android phone fans store music on the memory card of the phones after purchasing the phone. However, when they want to play music that stored in the memory card with the music player of Android operating system, they found that the music that they stored before has gone for no reason. 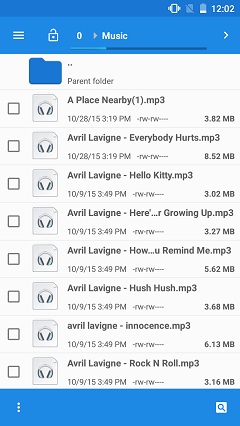 Solution 1: Transfer your music format into MP3/WMA/WAV and then store it in the memory card.
Note: To transfer music format, I will recommend you a useful transfer tool - Android Transfer. It enables you to transfer Android music to almost every format within few simple steps.

Problems 2: Too many catalogue levels are placed in the music file or the Android OS can't indentify the code.

Solution 2: To solve the problem, you only need to change the storing catalogue of these music files. You'd better place it in the file folder in the first level of the system's root directory. What's more, rename the file folder by English and Arabic numerals.

Problems 3: Internal card. The quality of some memory card is not good, so the music are fail while storing but displayed as if it is stored successfully in the Android phone like HTC.

Solution 3: To change another memory card and try again.