How to Enable USB Debugging on Android Phone

Now the passage will be divided into 4 parts so as to show you the way to enable USB debugging for three different versions of Android operating system.

Enabling USB Debugging on Android such as Samsung Galaxy S8/S7/S7 Edge, LG G6, etc with the system of Android Lollipop/Marshmallow/Nougat is almost the same as that of Android 4.2.x:

Now, I will take a Samsung device as an example to show you the way to enable USB debugging with newer Android version.

Step 2 Scroll down to the bottom and then tap on "Develop options".

Step 3 On the interface, you need to firstly swift on the button on the top. Then continue to scroll down the screen until you can see the "USB debugging" option. Turn it on and confirm your action on the pop-up window. 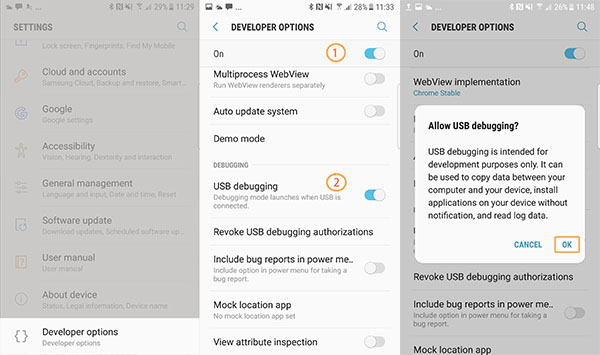 For the newer Android operating system like Android 4.2 or later, for example, Samsung Galaxy S6/S5, you can enable USB debugging by the following steps:
Step 1. Enter "Settings", then, click "About Phone".
Step 2. Tap "Build number" for 7 times until you get a note "You are under developer mode".
Step 3. Then back to "Setting", then, click "Developer options".
Step 4. The last step, tick "USB debugging"

If your Android phone is Android 3.0 to 4.1, you can enable USB debugging by clicking "Settings > Developer options > USB debugging"

If you use Android 2.3 or the earlier version of Android, you can enable USB debugging as follow: "Settings"  > "Applications" > "Development" > "USB debugging"

That's it. The steps are quite simple, isn't it? You can try it by yourself. You'll find it useful if you have tried.