How to Transfer Music from Android to iPhone/iPad/iPod

-- Monday, October 12, 2015
We often receive emails from users asking if it is possible to transfer music from Android to iPhone/iPad/iPod. The answer is absolutely "YES". Firstly, back up Android music to computer and import the songs into iTunes Library. Then, sync iOS devices with iTunes. This is a workable solution, but if you are looking for ways to directly transfer music from Android to iPhone/iPad/iPod without iTunes, TunesGo is a good choice for you.

TunesGo, as a professional transfer tool, enables you to transfer music files between devices running both Android and iOS system. Besides, it also helps you Rebuild iTunes Library, Transfer iTunes Media to Device, Backup Photos to PC and Phone to Phone Transfer.


Guide to Transfer Music from Android to iPhone/iPad/iPod

Step 2 Connect Android and iDevice to the Computer
Run TunesGo on PC/Mac after installation. You will see the interface as below. Then, plug Android smartphones like Samsung Galaxy, LG, Sony Xperia, Moto, HTC, etc. and iPhone 7/7 Plus/6/6s, iPad/iPod into the computer.

The software will start analyzing the plug-in mobile devices. Once the devices are connected, you will see the names of the handsets shown on the left column. 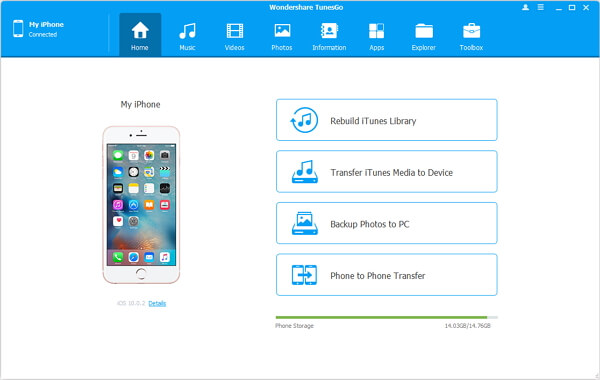 Note: For Android device, you need to enable USB debugging so as to make it successfully connect to the computer.
For Android 4.2 or newer: Go to "Settings" > "About Phone" on your Samsung. Press "Build number" for several times until "You are under developer mode". Then enter "Settings" again, and choose "Developer options" > "USB debugging".

For LG users, after turning on USB debugging, you should also pull down the dropdown menu, then switch mode in between "MTP" and "PTP".

Step 3 Transfer Songs from Android to iPhone/iPad/iPod
Click Android phone at the left column, then, select "Music" option. All songs stored in Android will be listed in the main window. Hit the "Export" button and choose the name of your iPhone/iPad/iPod in the drop-down list. The music transfer will get started. 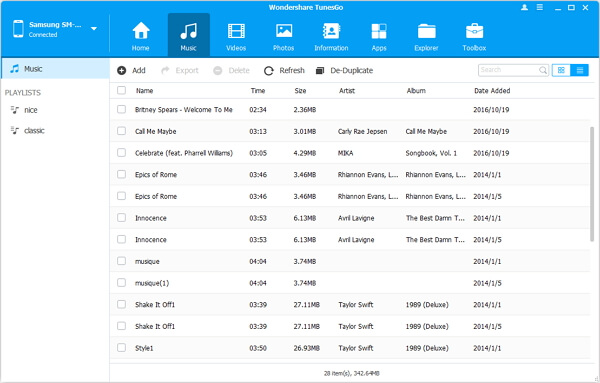 TunesGo is a very easy-to-used program which supports you to move music files from Android to iDevices in three simple steps. More than that, you can also transfer songs from iOS to iOS, between Android/iOS and computer as well as between iTunes and cellphones. If you have any question or suggestion on the software, please feel free to leave your comment below.